Joseph Lubin, the Canadian entrepreneur who co-founded Ethereum and ConsenSys appeared on Bloomberg TV on 14th August to address the recent bear market that has affected Ethereum. 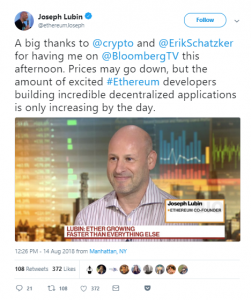 Lubin seemed to believe that the recent drop in cryptocurrency prices would not deter the growth of the ecosystem at large. He attributed the current price decline and volatility to ‘trader types’ or in other words, speculative investors. Lubin also acknowledged that the peaks observed over the year were a mere bubble, joining the league of the six big bubbles that came before it. He mentioned during the Bloomberg interview how these bubbles when viewed in context, “seem like little pimples on a chart”.

“…we build more fundamental infrastructure, we see a correction, and the potential gets even more impressive… I absolutely expect that there is a strong correlation between the rise in price and the growth of fundamental infrastructure in the ecosystem and the growth of development in the ecosystem. We are probably two orders of magnitude bigger as a developer community than we were eight or 10 months ago.”

Joseph went on to talk about how the developer ecosystem of Ethereum was significantly larger than where it was eight months ago, and that the leading price run-up would reflect this increase. When asked about the competitors that Ethereum faced up against, Lubin failed to acknowledge Ripple (XRP) or EOS to even fall in the same league as ethereum owing to their relative centralisation.

“It could be just because the total value of these monetary bases are small and it’s a very young technology and lots of news is coming out. But traders are sophisticated and traders will do what they can get away with”.

Lubin has also spoken in the past to outlets such as CNBC about how volatility observed in the Ethereum could potentially be a point of advantage.

“If price is high or if price shoots up and down, it’s actually great for us because it draws attention to our ecosystem, it draws entrepreneurs, it draws technologists and all of that interest drive fundamental value”.

Ether saw its value rapidly rise in February to over $1,000 due to token sales being offered by ICOs. As the projects began to cash out in order to run their projects, the price of ETH observed a drop of over 33%. Ethereums (ETH) value dropped to a nine-month low yesterday as it traded at $288. It currently is being traded at $281.17, with a market capitalisation of over $28.49 billion.