Investors and traders alike have been eagerly awaiting SEC’s decision regarding the Bitcoin ETF. Bitcoin exchange-traded note (ETN) has entered the arena as a notable alternative that holds the potential to eliminate the need for Bitcoin ETN.

A firm based out of Sweden, XBT Provider, which is a subsidiary of Global Advisors (Holdings) Limited, has issued the ‘Bitcoin Tracker One’. Bitcoin Tracker One is an exchange-traded note which tracks Bitcoin (BTC/USD).

The Bitcoin ETN can be traded on Nasdaq Stockholm (Stockholm Stock Exchange). In spite of Bitcoin ETN not being a U.S security, it is accessible to U.S brokerage/retirement accounts owing to it being available as an F share which is quoted in U.S dollars.

Although the product isn’t quite groundbreaking and other similar ideas have been implemented i.e Grayscale Bitcoin Investment Trust, it still offers an advantage over its competitors by being a much cheaper option which exhibits higher liquidity. The icing on the cake is that GBTC shares are currently trading at around 50% of Bitcoin’s (BTC) original price. 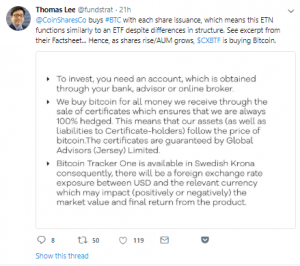 Thomas wasn’t alone in extolling knowledge about Bitcoin ETN as he was joined by Amedeo Moscato, the Chief Operating Officer at DX.Exchange.

While this may paint a rosy picture of Bitcoin ETN, the product does, however, come with a caveat. Since Bitcoin ETN has to be purchased from a Swedish company, investors will have to do so via the Swedish kroner which adds additional costs and exchange rates to the equation. The silver lining in the entire story may just be that with the entrance of Bitcoin ETN into the scene, the SEC’s decision regarding Bitcoin ETF may just result in a favourable result.

Bitcoin ETF on the other hand also possesses its fair share of detractors from esteemed individuals such as the BTC’s flag bearer, Andreas Antonopoulos. Andreas uploaded a video on YouTube on the 14th of August citing his concerns regarding its effects which included a possible increase in market manipulation from institutional investors. Andreas isn’t alone in his concern as many have echoed his sentiments, feeling that the cryptocurrency markets interest may not be served in the long run. Time will eventually reveal how all of this plays out once the SEC announces its decision regarding the BTC ETF on September 30th. 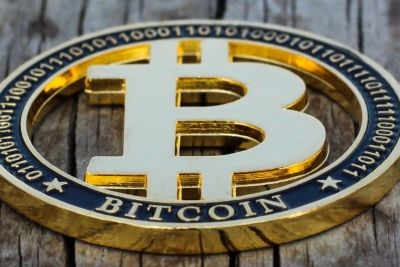