Interview with Greg Rogowski – Founder and CEO of Mining City 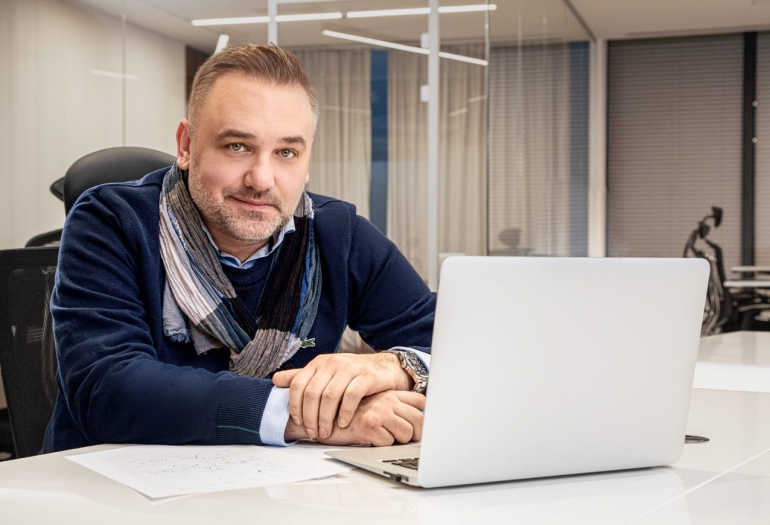 Greg Rogowski has been the CEO of the Mining City platform since it launched in 2018. He is in charge of most of the events organized by the Mining City and is always on top of all the latest blockchain news. He is based in Warsaw, Poland but splits time conducting his business in Asia, Africa and South America.

Greg Rogowski began his career in the media industry. After graduating from Warsaw University with a degree in Marketing & Neophilology, he worked for prominent European media brands such as Radio Zet, Agora and TVN. He also worked as a Brand Manager in Ubisoft and as National Marketing Director at TVeez in Panama. Altogether he has more than fourteen years of experience in management and marketing.

The combination of Greg’s professional expertise and a fascination with blockchain technology led him to start mining Bitcoin. His initial curiosity set him on a path to eventually developing one of the world’s largest crypto mining communities - Mining City.

This innovative and inclusive crypto mining platform brings together people from all over the world who want to combine their strength to mine Proof of Work cryptocurrencies. Since the project launched, he has travelled the world helping to spread the world about the merits of cryptocurrencies.

Greg has always been interested in science and art, which complement his creative and innovative business approach where abstract and lateral thinking is required. He shares his genuine interest in classical music and cars with enthusiasm for blockchain and cryptocurrencies in his private life.  He is a native Polish speaker but he also speaks English fluently as well as intermediate French and Russian.

We recently had the opportunity to talk to Greg Rogowski about life, work and executive leadership.


Can you share your approach to managing an effective balance between life and work?

I don’t know if I am the right person to be asked about it. I try to spend my time actively, which generally means working. I like contact with people, coming up with ideas, solving problems. Vacations are not my favorite time.

What is your approach when starting a new project?

I try to remain a humble man who is aware of his limitations. I don’t claim to know everything best. Instead, I try to surround myself with talented people who know better than me. And I build teams of trusted and capable managers who can create value.

What are your keys to effective decision-making?

Step back and think about what you are doing. Calm down and check yourself. It’s essential to understand the situation and other implications, especially when it’s related to marketing. It’s all about managing your own emotions.

How do you manage the stress?

Most of all, I enjoy listening to podcasts. Secondly, and this may seem surprising, I develop my other passion, astrophysics. Neil deGrasse Tyson and Carl Sagan are my heroes, brilliant scientists who have contributed to astrophysics. Let me add that in my thirties I bought a telescope. It was an unbelievable experience to see that all those objects were there.

What makes you a successful person?

I learn from life’s lessons and take on new challenges. I listen to people and then build teams out of them. It’s important to bring together professionals with different qualifications. Tech moguls often mention hard work. Well, I believe in efficient work. A little luck wouldn’t hurt either. It’s also worth remembering that not everything can be under control. It is more important to be able to react to unexpected situations.

What is your most satisfying moment in business?

It’s yet to come, and hopefully, it will relate to the Mining City. Creating a trusting community will be a success.

How does your typical day look like, and how you make it productive?

I have a 6 a.m. wake-up call every day. First, I check all the messages. Then I start a series of meetings. I find out about the status of projects. Then I arrive at the office where I attend recordings and sessions for our community. I try to manage everything directly.

What is the worst job you’ve ever had?

I worked as a regional sales manager for a large company. It was a typical corporation. The deals and intrigue were reminiscent of a plot from the TV series “Game of Thrones”. I remember my first task on my first day of work was to get myself a desk and a laptop. When my boss saw this, he asked me if I could help him get a parking space. I realized that this was not a place where I wanted to be, and I would manage my organization differently.

If you could start over, what would you do differently?

I’m not rich, but I have earned some success. So, I wouldn’t do anything differently to be honest. I think this question should be asked at the end of one’s life.

One thing you do over and over and recommend other people doing?

There are a few things. Don’t be afraid to make mistakes. Don’t hesitate to ask for help when it’s necessary. Stay humble. It’s also crucial to gain extensive experience. Doing different things in terms of career and meeting other people can be a life-altering thing. Lack of diversity can be dangerous.

One strategy that helps you to develop your business?

Don’t overpromise. When you promise and can’t deliver, that’s the worst thing that can happen.

Do you remember one thing you’ve failed at as an entrepreneur?

Only one? I’ve made many mistakes over the years. But it’s important to blame only yourself. Then failure is not a failure anymore. It’s just a slight stumble.

One business idea you’re willing to give away?

Once I bought a Marillion record. Or rather, it was a set of records. It’s a very sentimental object for me.

What software and what services do you use?

I’m a committed fan of Zoom, a little less of Microsoft Teams.

A book you recommend everyone to read and why?

It would be Twenty Thousand Leagues Under the Seas: A World Tour Underwater by French author Jules Verne. It’s about Captain Nemo’s underwater ship, the Nautilus, which was ahead of its time. Nemo was either a genius or a madman. Just like many other people nowadays who create technology.

Which people influence your thinking?

Steve Jobs influenced my thinking.  He said: “Some people say, “Give the customers what they want.” But that’s not my approach. Our job is to figure out what they’re going to want before they do. I think Henry Ford once said, “If I’d asked customers what they wanted, they would have told me, ‘A faster horse!'” People don’t know what they want until you show it to them. That’s why I never rely on market research. Our task is to read things that are not yet on the page.”

I also like Alexandria Ocasio-Cortez, a member of the U.S. House of Representatives, known for her clear perceptions and perseverance. And, of course – John Oliver. Americans are so lucky to have him, British very unlucky to have lost him.

What advice would you give to your younger self?

Don’t worry so much.